Tina approaches recruiting with the same attitude that Blueprint took with her – it doesn’t matter if you have the perfect resume or not. She pays more attention to the personality, experience and diversity of thought a potential candidate will bring to the company.

Tina Fu grew up in Beijing as an only child with many ideas about what career she might choose when she grew up. At different times she wanted to be the president of China, a scientist and a doctor. When it came time to pick a major for college, Tina landed on electrical engineering because she excelled at physics and math.

When the opportunity arose to become a computer science research assistant at the University of New Orleans while working toward a master’s degree, Tina decided to try it out. She learned to code and enjoyed coding to solve problems, but realized she thrived when working with people, rather than the relatively solitary work life of a coder.

Tina decided to attend Georgia Tech for a master’s degree in quantitative and computational finance, so she could specialize in applying computer science knowledge toward financial problems. After earning her degree in 2009, though, she and her husband moved to Seattle, and in March 2015 she joined Blueprint Technologies as a Technical Recruiter.

Now a Senior Technical Recruiter, Tina has recruited nearly 300 employees to Blueprint. Many of her new hires have grown to become leaders in the company, and many have won Blueprint’s Core Value Award. Tina said she is most proud of helping build the team in Blueprint’s nascent South Central region, which now has more than 40 Blueprint employees working with multiple clients. 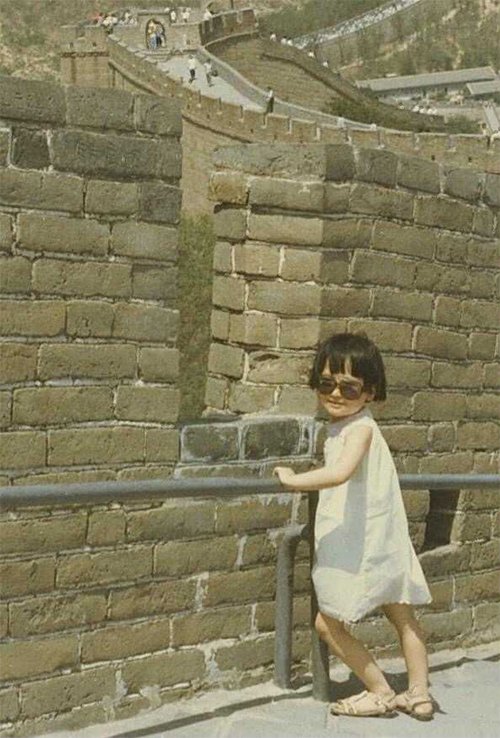 Tina as a child visiting the Great Wall of China.

Finding this career was not a straight or simple path for Tina. She started in Seattle as a Program Manager at a startup, eventually developing an iOS app in her free time. She wanted to learn more about new advances in technology, so she enrolled in an iOS development boot camp that many non-technical people attended in order to get a job or switch careers. Tina often sparked up conversations with the employees who helped students find jobs after completing the program. So, when a friend of Tina’s decided to take a break from work because she wasn’t excited about her career trajectory, Tina recommended the boot camp and told her all about the job placement help they provide.

“I helped open a door for her. She became a Technical Program Manager after that,” Tina said. “She appreciated my help, and doing it really excited me.”

About that same time, a recruiter contacted Tina about a recruiting position at a tech company, only to learn early in the conversation that Tina didn’t have the experience required for the role. It was a bit discouraging for Tina, but that recruiter ultimately opened Tina’s eyes to a career path she hadn’t fully considered.

With a bachelor’s degree and two master’s, Tina had a lot of career options. Because she hoped to find something that would suit her personality and be enjoyable for the rest of her working life, she began researching a career in recruiting. She talked to a couple of friends who were in the profession and decided becoming a recruiter sounded perfect. Not only do recruiters build an impactful bridge between people and companies, she thought, but recruiting in the tech space would marry her tech background with her love of working with people.

So, Tina took a chance and applied for a recruiting position at Blueprint Technologies.

“I found the Recruiting Manager on LinkedIn. I messaged him that I was really interested in the position, and asked him to please look at my background,” Tina said. “Blueprint impressed me. They didn’t reject me automatically because of my lack of experience. They saw my potential and gave me an opportunity.”

Blueprint seeks that type of diversity of thought and experience in all its employees because it fuels success. Building teams of people with diverse professional and personal backgrounds is a key to Blueprint’s ability to build optimal solutions for tough business problems. That logic applies to the recruiting team as well. That Recruiting Manager could see that with her two master’s degrees and unique background, Tina could learn everything she needed to thrive as a Recruiter at Blueprint. More importantly, she would be able to seek out the diverse talent that drives Blueprint.

“Tina’s background helps her connect beyond the surface with candidates. She knows tech, and she understands what environments candidates will thrive in,” said Managing Director of Solutions Delivery Heather Glynn, who was previously Tina’s manager. “A big reason Tina thrives at Blueprint, and why she has set recruiting records, is that she ingests everything about new technologies, tools and platforms. She also strives to understand the impact a candidate will have here so that she can paint that picture for them.”

Tina approaches recruiting with the same attitude that Blueprint took with her – it doesn’t matter if you have the perfect resume or not. She pays more attention to the personality, experience and diversity of thought a potential candidate will bring to the company.

Tina’s first step is sourcing good candidates. There are of course a set of crucial requirements for any position but getting candidates on the phone to learn about their personality and what drives them is the most important part, she said. She focuses on past work projects of candidates and the things they are looking for in their career and from an employer to make sure core values match.

Tina also prides herself on being a resource for candidates throughout the recruiting process. When she gets an email from a candidate, for example, she does her best to respond immediately, because she knows that creates a better experience for the candidate and shows what Blueprint is all about.

The best part for Tina, though, is meeting so many people.

“I enjoy finding the right people for the right positions, but I love learning about people and making friends,” she said. “You won’t be close friends with everyone but getting to know so many people is really the best part of my job.”