Porter for my family’s bowling center

“The Belgariad” books by David Eddings

Where did you grow up?

I was born in Santa Maria, California when it was still a small agriculture community. My parents separated when I was pretty young, and my mom had a variety of jobs. As a kid it always seemed like she was working two or three jobs. She did whatever it took to pay the bills. We moved to Washington in 1982 when I was 14 years old – the same year my grandparents and my uncle bought a bowling alley in White Center. I worked there all through high school and even into college a little bit.

How did you get into computer information systems?

My first two years in college I was pre-med, but then I realized that meant a lot more future schooling. I had a partial football scholarship, but I blew my knee out in the first game of the year. The next year I blew the same knee out again working out in the offseason, so I knew I wouldn’t be able to play and was going to lose that scholarship. I needed to make another plan. I had a summer job at Boeing doing roofing of all things, and since I wasn’t going to be able to go back to school, I asked if I could stay on full-time. My boss helped me get in as a mechanic in the Auburn plant. After a year, Boeing would pay for your school, so I was able to finish my degree at City University. I had taken some programming in high school and took Cobol and Fortran classes in college just to stay up with what was going on. I really enjoyed that, so I went the computer route because it was the up-and-coming thing at the time. 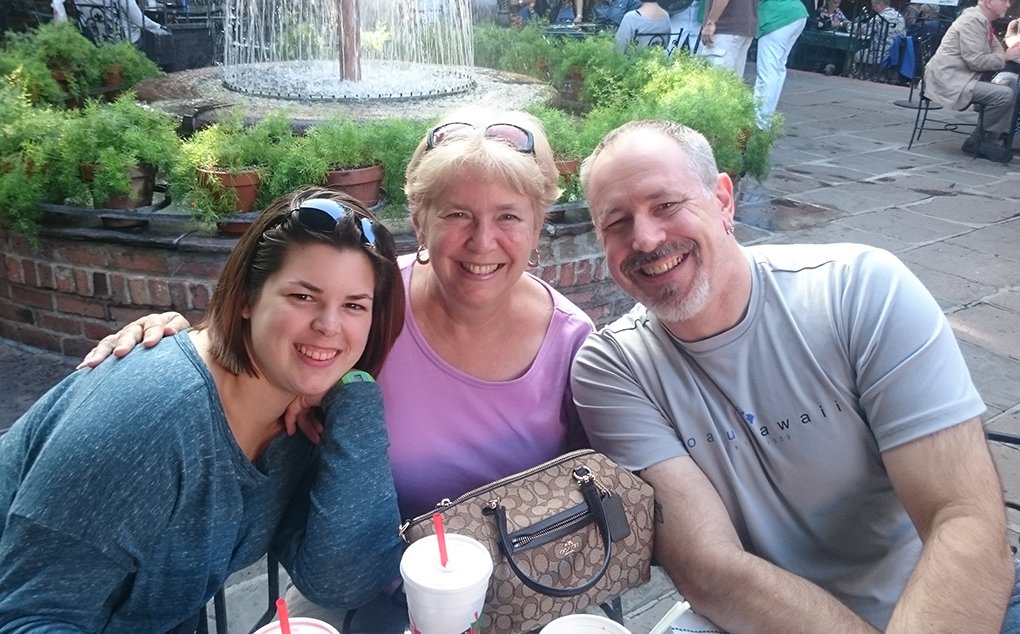 Steve, his daughter Kayla and his mom Brenda (his biggest inspiration) in New Orleans.

I transferred into a job at Boeing where I actually got to use a computer and went from turning a wrench to using a keyboard. I worked there another 5 years doing IT work. I worked on the engineering systems for the 777 program, and I worked on several projects on the military side as well, like the B-2 Bomber and the A-6 Intruder. In 1994 Boeing was in a downswing, and I took a voluntary layoff so my team could stay on. I took a consulting gig and spent a year in Microsoft’s executive briefing center and then left for a small consulting firm in Seattle for a couple years. Then I went back to Microsoft and stayed for 17 years. There, I went to the IT side of things supporting applications. With my development background, I was able to help troubleshoot issues more quickly, and I did some development of internal tools to help manage the infrastructure. My team went from initially supporting 50 servers to supporting thousands – you can’t do that with 10 guys unless you have good processes and instrumentation in place.

How did you end up at Blueprint?

Seventeen years is a long time to be at one company, and I felt like I needed a change. A friend I knew from Microsoft had co-founded Blueprint and we’d kept in touch. We had talked about me joining, but we wanted to hold off until there was an immediate project that would allow me to fully utilize my skillset. When the need for someone with a really strong SQL background arose, it was a natural fit. The timing just worked out.

I think the key to my success has been my diverse background. I have experience in several different industries: Manufacturing and defense on the Boeing side, insurance as a consultant, and legal, finance, HR and corporate services at Microsoft. Working in those verticals, I gained some insight into how those types of businesses run, and that really helps because I understand the terminology and applications for each. It’s also helped that I’ve grown up with IT. If you’ve been doing it all along, you grow with it and evolve with the technology. I’ve been working with SQL servers since version 4.21a, so I’ve essentially worked with every version of SQL server that Microsoft has developed.

What is the most important lesson you’ve learned from previous roles that you apply to the work you do now?

From my time back at the bowling alley 40 years ago, I learned to keep the customer happy. If that’s your first goal, the rest will fall into place. I grew up with that customer service model waiting on customers and helping make their experience better. Whether that’s quickly cleaning up or anticipating what they may need before they need it, like bringing them an ash tray when they pull out a cigarette, I’ve applied that same mentality throughout my career. In most cases, I’ve gravitated toward roles with a customer-facing function because working with customers and making them excited about a project is where I get my energy.

You were an early employee at BPCS – how has the company changed?

One of the things I love about Blueprint is the entrepreneurial mindset and openness within the company. It was one of the things that attracted me, having met with Blueprint President Ryan Neal early on. I appreciate that if you want to know anything, all you have to do is ask. I also love that you can control your own destiny here. If you don’t like the job you have, you can create the one you want. If it’s something that will help the company, you’ll be free to do that and they’ll figure out how to backfill what you were doing. Those two things about Blueprint have always appealed to me and remain with the company now. In terms of change – we’ve certainly grown and changed with regard to size, growing from about 50 people when I joined to nearly 700 now. It’s amazing to me that Blueprint still doesn’t feel like a big company. We’re pretty close-knit even though we are kind of spread out physically.

Who is your biggest inspiration?

Without a doubt, my mom. We never had a lot growing up, but I never went without. I think back to playing sports. I played football and baseball and ran track, but I never went without a glove, cleats, a bat or track shoes. If I needed it, it just happened. Now, having kids of my own, I get it. I understand what it took for her to do that. And for her to have done it on her own without ever making it feel like it was a burden – that is just huge.

If you didn’t get into IT and Dev Ops what career might you have gone after?

I think the hospitality industry. I could see doing hotel management because it’s more people-focused and event-planning type of work. I find myself doing that stuff anyway, honestly. I can’t go to a wedding and just be a guest, I have to help work the wedding – help set up or direct traffic. I just gravitate toward that type of work.