A six-week summer job as a cleaning lady

You grew up in Germany; tell us a little about your background?

I was born in Germany as the eldest of three. When my sister was born, we moved into a large, very old house. To this day, it has no central heating – only fireplaces – it is fairly medieval. My mother was a housewife, which was very normal at the time. Perhaps I should add here that this was West Germany before the wall came down. My father worked as an electrician for a midsize Japanese company. Like many people in our area, we were not well off, but my parents did their best to support, and sometimes spoil us. I enjoyed learning and received many books as presents. That was always okay with them, whereas TV or, later computers, were not – I usually had to sneak in some of that at friends’ places. I once read a dictionary of foreign loan words cover to cover; no one had told me that’s not how you normally do it. At school, I decided early on to attend classes that would allow me to become the first, though not the last, in my family to complete a university education.

Do you remember what it was like when the Berlin Wall fell?

I was 9 years old when the wall came down. My hometown is 20 minutes from the Netherlands and about an hour from Belgium. Because my family didn’t have relatives or friends in the East, the wall didn’t really exist to me. I only vaguely remember seeing people dancing and singing on TV, and someone telling me that the wall was down, but I didn’t know what it meant. It wasn’t a moment I could really appreciate at that age. But 40 years of separation isn’t something that goes away overnight, and the process of reunification isn’t even finished now. I do remember that after the wall came down, my family went on vacation in parts of East Germany. It was very much like a foreign country. It was strangely similar but different. They spoke the same language, and we could communicate, but at the same time, their experiences appeared almost alien.

You have a master’s in Modern Japan/Medieval European History – what made you choose that degree?

I always loved learning languages. In secondary school, I took Latin, French and Spanish, but then I decided I wanted to learn a language that was not European. I took a Japanese evening class for a semester during my last year of secondary school. It was very different – there are three alphabets. I enjoyed the challenge, and when I learned that a nearby university was offering that major for the first time, I thought I’d give it a go. I have always liked history, and I decided to dive into the Middle Ages because you don’t usually learn about it in school; you learn about the Egyptians and the Roman Empire, and then suddenly you are in 1914. I wanted to know more about all the stuff in between. 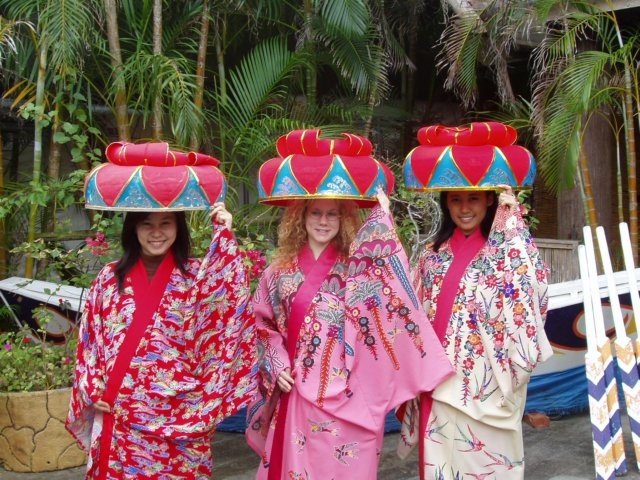 Sara and friends in Ryukyu-mura in Okinawa, Japan, where she studied abroad as an exchange student.

How did you go from history to localization?

It was certainly not a plan. My husband and I moved to Japan because I wanted to live there for a while after studying the language. One of the few things you can do as a foreigner in Japan is teach English. It was a booming industry at the time, so I taught people from the age of 3 to the age of 93 in a variety of different situations. Teaching in Japan is great for people who want to explore a foreign country while earning the cash that allows you to live there, but if you want a career, you usually have to look elsewhere. Since my husband is from Hawaii and does not speak German, we decided to move to the U.S. When we arrived in Seattle, I applied to the mobile games company Big Fish Games, which was seeking German native speakers for its new localization department. My husband was originally the one who wanted to work in localization, but because I know two languages fluently, I was the one who ended up doing just that.

How do you describe localization?

Localization is taking a product or a service and presenting it to customers or users in a way that does not show that it was conceived in another language. It is more than just translation. In localization you not only adapt things linguistically, but you adapt them to sentiments and references that people of a specific audience and locale would understand. For example, in the gaming industry, it is common for game designers to make pop culture references, so you end up with references to TV shows that were either never shown in another country or were completely dubbed – meaning those references just don’t work in translation. If you have enough time though, it can be a lot of fun to find creative solutions and adapt those sorts of phrases into something that would make sense in another language.

What keeps you at Blueprint?

We have a great team, and I appreciate that there are people from more backgrounds than I’ve ever encountered in a workplace before. I enjoy that our work is varied because I enjoy learning about so many different things. I remember translating hardware descriptions at one point, which led me down a rabbit hole of how camera technology works – there were many words I didn’t know in German. I came out a few hours later knowing much more about how camera lenses worked and could move on to the next sentence. Localization is really big in the Seattle area, and I value the expertise and quality Blueprint brings to the table that allows companies presenting something to a local market to do so confidently. 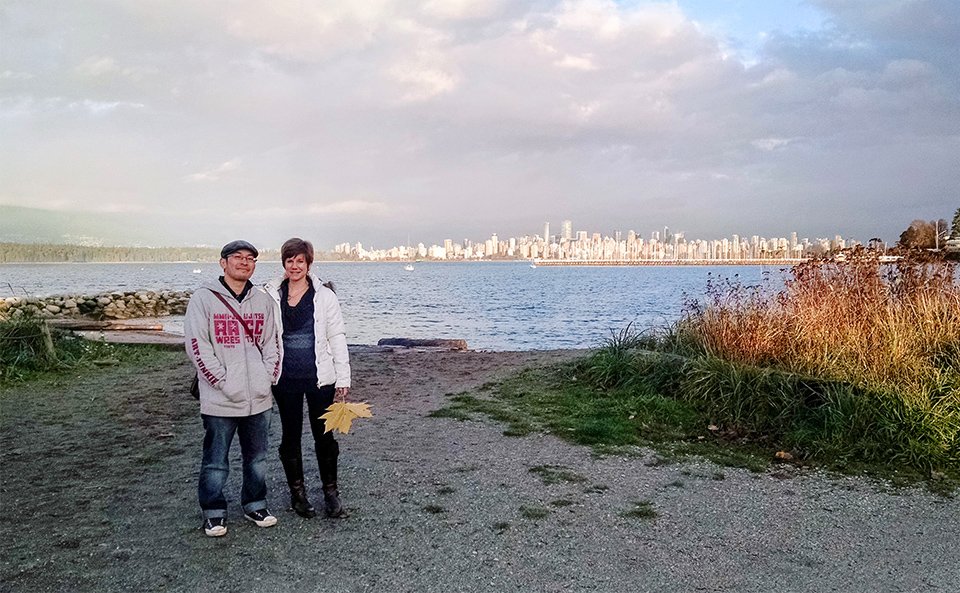 Sara and her husband Tony outside of Vancouver, BC. They met while studying abroad in Okinawa.

What do you do outside of work?

I love to travel. I wish I could travel more because there are way too many places I want to visit. I’ve never been to Portugal or Scandinavia, and I’d like to see the Northern Lights. One thing my husband and I still want to do is take the Trans-Siberian Express from Moscow to Beijing. We also loved traveling through Japan. One of our favorite trips was to the northernmost island, Hokkaido, which is a little different because it was home to indigenous people before it was settled by the Japanese much later than the rest of the country. My husband and I actually met on the southernmost island of Japan when we were studying abroad. We started out as exchange students in Okinawa in the same dormitory. We were in a long-distance relationship for 4 years afterward – him in Hawaii and me in Germany.

I heard you are writing a novel; can you tell us about it?

Who told you?! No, it’s true. I like writing. I wrote my first almost-novel, a sci-fi story, when I was about 13 years old. That was on a typewriter – I think I drove my parents nuts. That story is probably in a shoebox somewhere in my parent’s basement – at least I hope it is. It might be fun and embarrassing to look at. The one I’m writing now is both historical and contemporary as it plays out in two timelines. I started it in 2016 with just an outline and a lot of research. Once you start, you realize how much you don’t know. I’m happy with where I am, but I’m working on it slowly because I’m just doing it whenever I have time. I am hoping to be done this year – we’ll see if that happens.