Babysitting starting in 7th grade. The first job the IRS knew about: working in my aunt’s café in Clinton, OK – they have the best homemade pie!

“The Princess Bride” – my family watched it and quoted it often!

Your dad was in the army – what was that like growing up?

My dad was stationed in San Antonio multiple times, so we didn’t have to move around as much as most military families. We moved five times while I was growing up. Each time he was stationed in San Antonio, though, we lived in a small town to the east called La Vernia. It was a sleepy little town with good schools, one stoplight and a Dairy Queen. I started kindergarten and graduated high school from the same town – I just missed some in the middle while my dad was stationed elsewhere. It was nice to attend high school with kids I knew instead of starting all over in a new location. We also had the privilege of living in Hawaii and Germany. I was pretty young while in Hawaii, but Germany really made an impact. My parents took advantage of living overseas, and we traveled heavily while stationed over there. With four kids in my family, that was the only way our family of six could have afforded to see Europe. 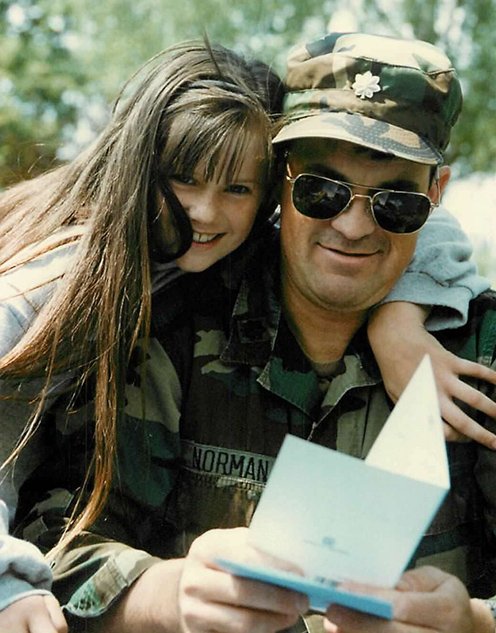 Lindsey with her dad in Germany.

How was Germany so impactful?

I’m the youngest of four kids: two boys and two girls. We became a closer family unit during those three years. We only had each other for much of that time, and my sister and I are very close because of that experience. We were there when I was between the ages of 8 and 11, which are pivotal ages to be completely immersed in a different culture. It educated me at a young age about history and culture – even if I didn’t always know all the details behind each destination. We visited a concentration camp, historic landmarks and cathedrals; I saw the Sistine Chapel and the Mona Lisa. I didn’t always have a firm grasp of how important some of these things were and the significance behind them, but it gave me a very different outlook when we moved back to the states – to a small town where Texas football was the height of importance. This was the ‘90s – there was no social media or the internet to expose people to much outside their circles.

How do you think those experiences shaped you as an adult?

I learned at such a young age just how big the world is. It took off the blinders people can get when growing up in the same place. It gave me an early appreciation of different cultures and ways of doing things – everything from how you shop and prepare food to experiencing different types of transportation and architecture. It gave me a greater sense of adventure – as an adult, I love discovering new places, cultures and experiences. Because of how I grew up and all my travels, I think I am willing to listen and be open-minded about people. We live in a world that can feel so divided, but how I grew up gave me the ability to have differences with people and still appreciate and respect them. It helped me discover we can’t put everyone in boxes and make assumptions; we need to talk to people to understand their experiences, where they come from and all the nuances that make them who they are, so we can learn from one another.

What were you doing before you joined Blueprint?

I attended Oklahoma State University in Stillwater and graduated with a degree in marketing and management. Even though I was the youngest of my siblings, I was actually the first to graduate. I had graduated high school a year early and graduated college a semester early, so I beat them to the punch. My first job out of college was with the mortgage division of a bank. I was there for more than seven years. I started in the bankruptcy department – that was tough right out of college, but it was a great learning experience. I worked my way through the ranks and started working for the corporate office. In each role I was in, I learned new skills, but eventually, I got to a place where there wasn’t much more upward mobility. A supervisor recommended I make a move to oil and gas because she thought I had a lot of potential. I randomly applied with Chesapeake Energy, got hired and started learning my way around the industry. It was a total shift of industry and lingo. I could transfer some of my skills, but I had to figure out so much. I set my sights on becoming a tech analyst and did what I had done in banking: made myself valuable and changed jobs whenever I saw opportunities to further improve my skill set and knowledge base.

What made you want to join Blueprint?

I loved working for Chesapeake, but they were struggling. During the eight years I was there, we experienced rounds of layoffs about every 12-18 months because the industry is so dependent on pricing. That environment is a constant stressor. My last role before leaving was in logistics and planning. I was scheduling all our activity in the asset, making sure none of it conflicted because there are many moving parts. With oil and gas wells, you also have to have a lot of contingency plans – you never drill precisely on time or frac a well in the exact time you think it will take – so I was developing those plans. I identified how to strategically schedule everything to maximize value for the company. I loved it – it was like a giant puzzle that was constantly moving. Because the company’s fate seemed obvious, though, I contacted people I knew who had moved to Blueprint. Blueprint was growing and needed people to help manage projects, which they knew would be a great fit for me.

How do you describe the work you do at Blueprint?

As a Delivery Manager, I help oversee the projects we’re doing for various clients and provide whatever support is needed. Some require me to be heavily involved in the details, planning each sprint to ensure we’re at a pace to complete each deliverable by the end date. But others require a lighter touch where I oversee the main components of the engagement. We adjust based on the needs of the client. I lean heavily on our talented technical staff to execute our current project and help advise on subsequent phases. I’m referred to as a “People Manager” in that I help our team with any development needed outside of the technical realm – they have a technical manager to oversee those details. I love working with such talented people and helping them reach the next level of their career; I love finding out more about them and strategically placing them on projects I know they’ll shine. 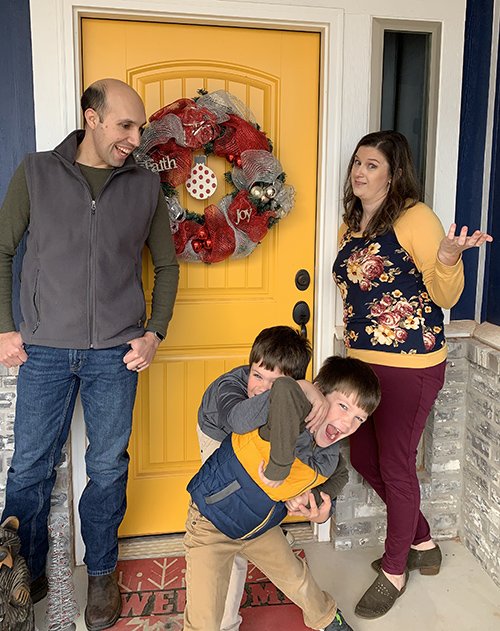 Lindsey and her husband Whit, have their hands full with their two energetic sons.

Was it difficult going into tech with no experience?

I had switched industries before, so it wasn’t too bad, especially because I love challenges and learning new things. With my prior experience as an analyst and tech, I was accustomed to querying data and developing reports or visualizations most beneficial for the team to consume. I could understand our clients’ end goals and how they would ultimately need to consume their own data. Blueprint gave me the opportunity to learn new skills and terminology, but because I had worked with oil and gas, and Blueprint works with so many clients in the energy sector, I knew I was bringing that expertise to the table as well.

I know you love to travel – if you could live anywhere in the world – where would it be?

On the beach – anywhere. Oklahoma doesn’t have any beaches – other than a few man-made ones on a lake, which is just not the same. I love sitting out on a balcony and looking out on the beach. It is so relaxing. Maybe it is time to take the family to a beach for the summer – I can work remotely in an Airbnb!

What are you passionate about outside of work?

I’m a CASA volunteer – a Court Appointed Special Advocate for children in foster care. I provide support, connect them with additional resources and am their friend during a time that can be very stressful and confusing. I learn about their case and talk to their teachers, foster parents, biological parents and anyone else within their care team. At each court date, I make a recommendation to the judge regarding their permanent placement and advise whether the court needs to provide them additional services. Volunteers only receive one case at a time (potentially multiple siblings within one case), so even someone who works full time can provide a few hours each week to make a difference. There are chapters all over the United States, and I’d encourage everyone to check into it.

If you could go back in time and give yourself career advice, what would it be?

I would tell myself that I am capable of more than I thought I was. There have been numerous times in my career that I’ve had fantastic managers who were mentors and helped me see that I was capable of more. I wish I could have seen it in myself a bit earlier. It wasn’t until my role in planning and logistics at Chesapeake that I truly developed my voice and confidence in my own abilities – I was no longer afraid to provide my input and suggestions. 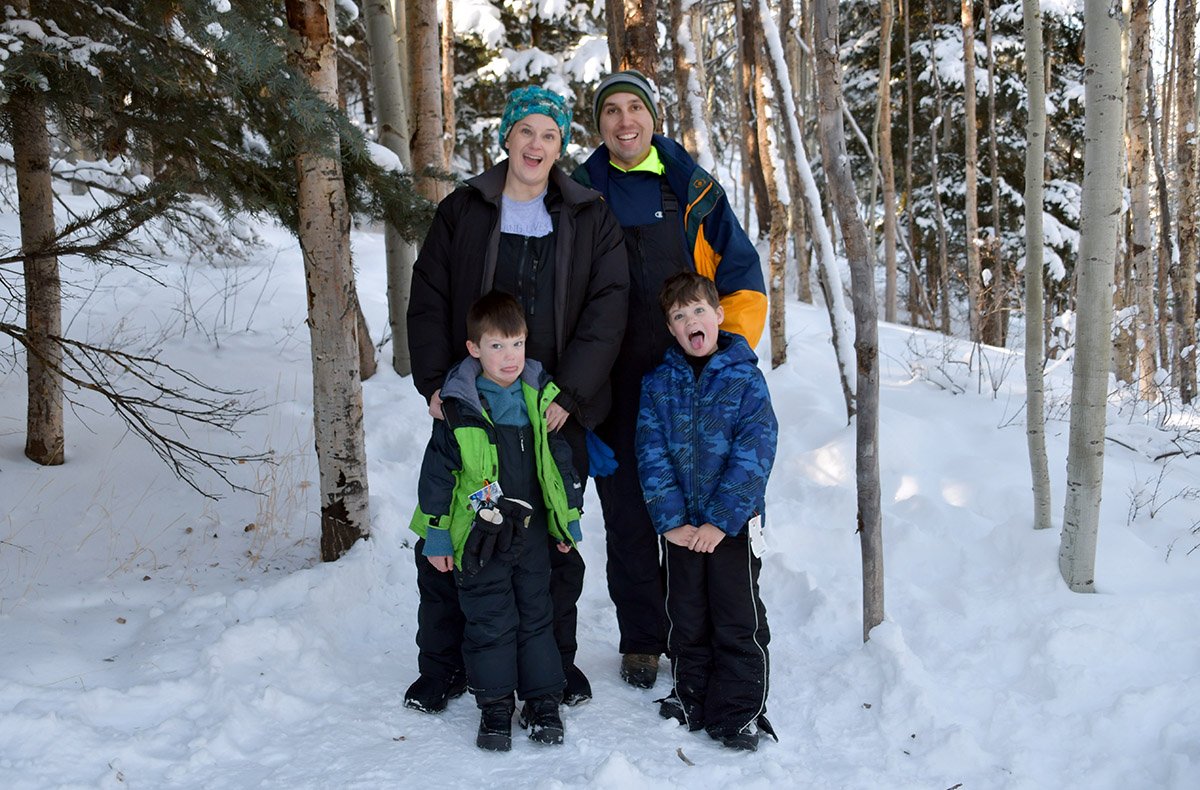 Lindsey and Whit, with their sons Ryker and Lenox on a ski trip in Angel Fire, NM.

OK – we need the story about meeting your husband on Craigslist.

This was at the end of 2008 – there were a couple of dating websites back then – eHarmony and Match, I think, but there was no Tinder, Grindr or OkCupid – whatever apps people are using now. I had tried the websites, but a friend of mine had just gotten engaged to a guy she found on craigslist. She had an extra ticket to an event and posted on Craigslist looking for a date to go with her. It was supposed to just be that event, but they hit it off. So, I decided to try Craigslist. I posted on the personals section, which can be very risky. I made a list of criteria and posted it. Some of my criteria were: the man needed to live in Oklahoma City, be older than me (hoping that would mean mature) and Christian and he couldn’t smoke or dip (which you have to specify in this part of the country). Whit responded. We emailed, and as we got to know each other, I discovered he didn’t meet all my criteria – he was a year younger and lived over an hour away. But it turns out he was from the same small town in rural Oklahoma as my entire extended family. Whit’s family had known my extended family for decades. My cousins went to church with him and his parents. My great uncle was best friends with his grandfather for 50+ years. Another cousin of mine was one of his teachers. So, we met at a restaurant for our first date, and while he was a very quiet country boy who wore a John Deere shirt for our first date, I could tell he was a good man. We got married in 2010.