Heather Glynn breaks it down

“When you approach something new, it can feel like an enormous task and can become overwhelming very easily. But, if you can break it down into small, consumable projects and incrementally make progress toward executing your goal, you have little wins over the course of time and a big win in the end.”

Sitting next to the mouse pad on Heather Glynn’s laptop is a pink Post-it that says, “Break it Down.” It is a mantra Heather’s lived by her entire career, but nowhere has it been more applicable than during her more than six-year tenure at Blueprint Technologies.

Heather was hired in 2014 as the No. 2 operations employee for the company, which then had fewer than 50 employees. She had no background in the tech world, but she drew from her strong operational background to help build Blueprint’s foundation and guide it through its fastest-growing years — all while staying grounded by focusing on the steps needed to set the company up for success.

During her time at Blueprint, Heather has held four divisional managerial roles and has served on the internal leadership team for five years. She has been instrumental in helping the company grow not only to 700 employees, but in expanding the type of work Blueprint does and how it does it.

Heather’s career path did not take the trajectory she anticipated when she started college. With plans to become a teacher, Heather was seeking a master’s degree in education. After working in a 4th grade classroom over the summer of 2001, Heather decided to switch career paths. Not knowing exactly what would be next, she took a job at a Dale Carnegie Training franchise, becoming the office manager. Working there she witnessed the owner in action, living the Dale Carnegie mantras about personal development. It was so inspirational to Heather that it sparked a passion for working with people and helping them reach their full potential.

Looking for more growth opportunity in operations, Heather took a job managing the operations at The Spa at the PRO Sports Club even though she knew nothing about the industry and admittedly had never had a facial at that point in her life. Not having a background in the industry didn’t stop her though. She dove in, managing a team of 130 technicians, managing the financials, including compensation models and payroll, and standardizing operational documentation and procedures for her team. It was the same for Heather when she took her first job at Blueprint. While she was a consumer of technology, she said she would never call herself a technologist, but she jumped into a tech company anyway because she had the people and operational skills she knew would be needed to do the job at hand.

“I had to talk myself off the ledge a couple times, but at the end of the day, I knew I had the transferable skills, it was just a matter of applying another thought process around it,” she said. “I stepped into a completely unfamiliar environment when I stepped into my role at PRO Sports Club, so I knew I could do it again at Blueprint.”

Early on, Heather transitioned from the core operations team at Blueprint to lead the fledgling recruiting team. What started as a 90-day stint became a 2-year role as Blueprint achieved explosive growth. Under Heather’s leadership, Blueprint hired dozens of new employees per week, which helped the company win the Puget Sound Business Journal’s Fastest Growing Private Company award in 2015 and 2016 and land on its list of Washington’s Best Places to Work in 2016. 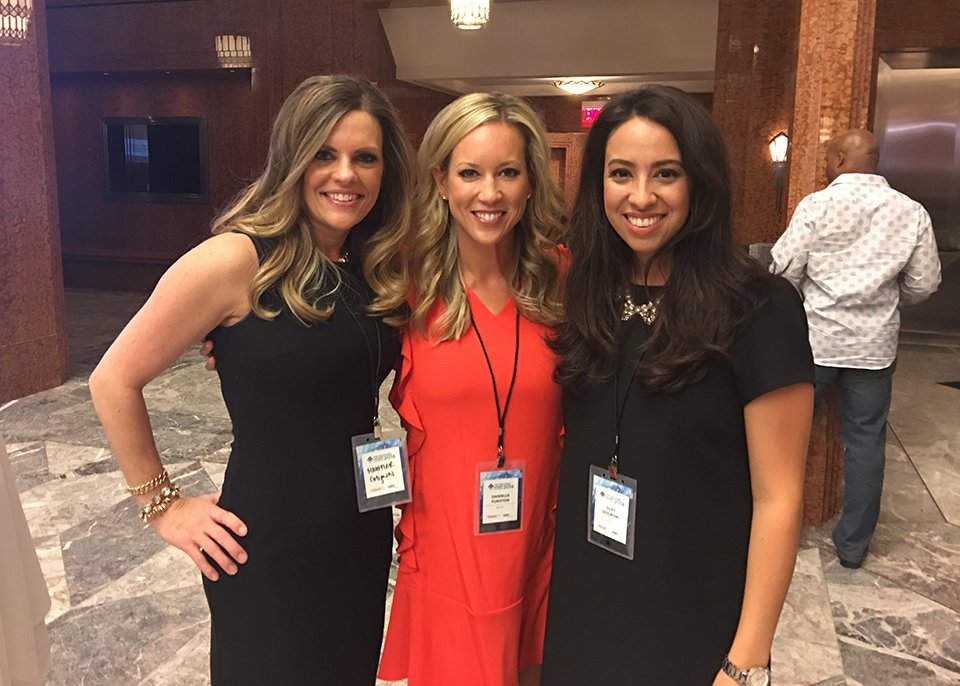 Heather, Danielle Funston and Suzy Dolbow of Blueprint pose before receiving the award for the Puget Sound Business Journal’s Best Places to Work in 2016.

Always looking to challenge herself and learn new things, Heather approached the company president about creating a dedicated human resources team to work with all the new employees. With the green light to take on the project, she moved back to core operations to build out an HR team to implement and oversee policies between new employees, the management team and the company, and support all the newly hired employees in every capacity.

In February 2020, Heather stepped into a new role on the delivery team because she recognized a part of the business that could benefit from operationalizing and standardizing processes. She is now the leads the team, overseeing the success of every client engagement.

Since Heather took over solutions delivery, the team has templatized processes, allowing checks and balances to work effectively. We have more active engagements than ever before, and our client satisfaction is at its highest. A big reason for this is the work behind the scenes Heather is doing to ensure all team members are successful.

“I am running delivery like one of our engagements. I always felt like we were being reactive, so I wanted us to get out in front of things and be able to reprioritize quickly when we need to,” she said. “I’ve literally incorporated my “Break it down.” methodology into Blueprint’s delivery methodology and we’re seeing results.”