I had a very rural upbringing – my high school graduating class was 25 people. It was an interesting way to grow up – pretty solitary. My nearest neighbor was a mile away and the nearest person my age was my cousin, and he was 3 miles away. The property originally started out as a dairy farm – it was about 250 acres that was my maternal grandfather’s farm. All his kids basically lived on and around his property and eventually it became each of their inheritances. As modernization kicked in, local dairy became extinct and we switched over to raising beef cattle and growing hay, so I have a lot of memories of being chased by herds of cattle as a child. I remember the summer I was 8 years old, I went the entire summer without wearing shoes – just as a challenge to myself. I did a lot of weird things like that. With my parents working, my brother and I would be at home alone for hours. There is a lot of self-reliance that comes from that. 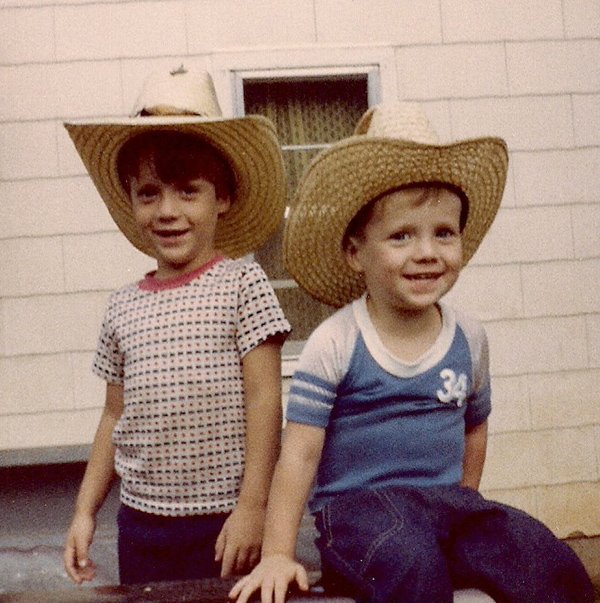 Brandon (pictured with his brother) growing up in OK learned independence at an early age.

That is such a unique way to grow up; how has that experience shaped you?

A lot of people don’t have that ability to be alone. I’m very self-directed because of it, and I prefer to work in an environment where I’m shown or find a problem, and I fix it. That’s one of the reasons Blueprint works for me because that’s the nature of a lot of our work. I learned the value of solitude early, and I also learned the richness of coming up with an idea, executing it and then moving on to something else. That was most of my youth – I’d imagine something and then do something that would fulfill that imagination. Toys didn’t last long in my hands – I was always taking stuff apart. When and where I grew up, we had three TV channels. Cable TV didn’t exist out there. So, I spent a lot more time in books than I did on TV. Because of that, I also developed a natural curiosity – I’ve still got a few books from when I was a kid, like the World Atlas. There are even notes in the margins.

How did you get into IT and tech?

When it comes to the IT stuff, I guess I have a knack for it. I built the computer lab for my high school, building the actual computers and networking them all together. Our guidance counselor was a former IT guy, and he took a group of three of us under his wing. I crawled through the drop ceilings of the high school, ran the cable and set up all the operating systems and software. That was really the first exposure I had to doing IT work. When I went to college IT systems seemed like a good fit. I also minored in English and creative studies, but computers were really a logical route for me.

What do you do outside of work?

I was also an early adopter of 3D printing, so I like to make stuff. I make toys for my kids and tabletop RPG mini figures, and I recently got into terrain building, which is essentially dioramas out of foam for Dungeons and Dragons. I’m in four D&D games right now. I also play music. I’ve played guitar, bass and keyboard in a few bands over the years. I mostly play piano now, and I’ve recently been getting into Eurorack synthesizer modules. With Covid, I’m the de facto music teacher for my kids’ music lessons. 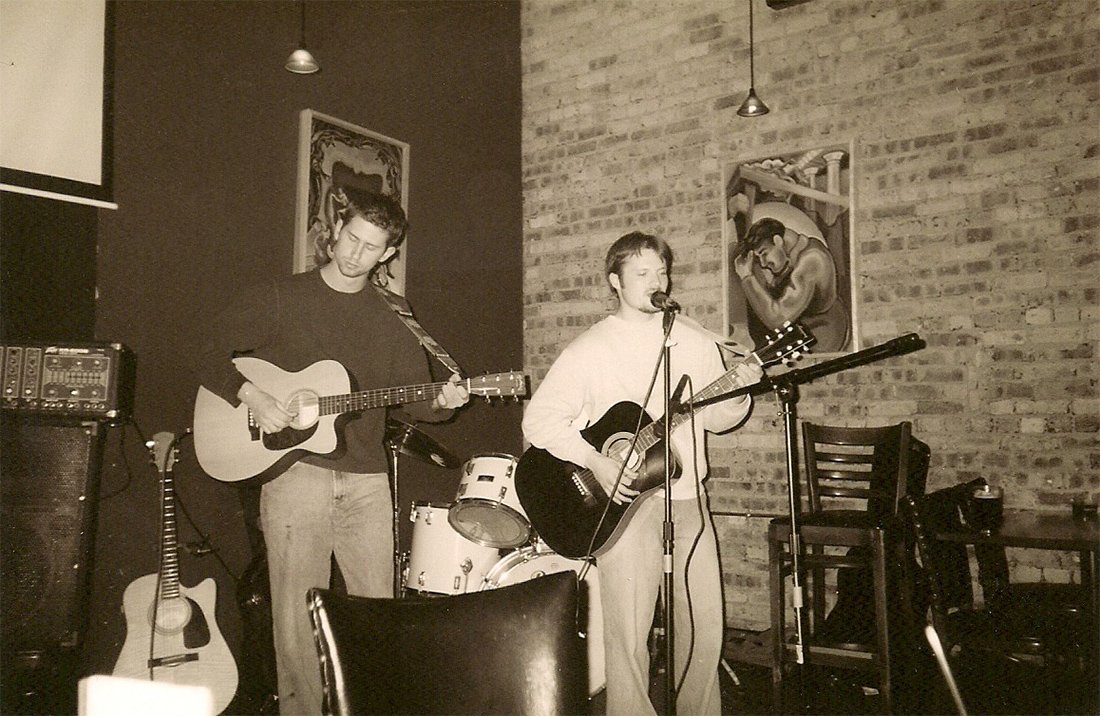 Brandon and his best friend during a week-long road trip to Chicago back when they were 22. They played at open mics and busked to earn spending money.

What was your background before joining Blueprint?

Right out of college, my friend and I decided we want to run our own IT firm. We did small business networking configuration, and we did that for about a year and a half. From there we moved on and got “real jobs.” My first was at Kerr-McGee, an oil and gas company that had been around 80 years when I started working there, and they were very old school. From there I was briefly a developer at Farmers Insurance but didn’t really like being a developer as my official job role. I felt boxed in by it, so I left for a role at Chesapeake Energy.

How did you end up at Blueprint?

When I was with Chesapeake, I developed for and maintained the enterprise workload automation system for about 10 years. When you’re a workload automation specialist, you become a generalist by default because you operate within every platform. I had to understand Linux, Unix, Windows and everything in between. By the nature of the system I ran, I became very comfortable getting into new operating systems and configuring things for them, which set me up for where I am now. Some friends and colleagues had moved to Blueprint from Chesapeake and one day one of them invited me to lunch, and I was interviewing at Blueprint the next day.

Why is Blueprint the right fit for you?

The flexibility and self-direction at Blueprint work well for me, and it seemed like the right fit at the time, and it still does. I like that Blueprint isn’t hung up on hierarchy in the way traditional companies are. If you come up with a good idea and pitch it, you might be able to create a new role or an entirely new product. It’s really that mobility and flexibility that I really like.

What is the coolest thing you’ve done at Blueprint?

I’ve done some good DevOps work and some interesting build processes for legacy systems that a company had acquired. It’s been a lot of problem solving, which is really what I’m interested in. I’m not super interested in computers; it’s the systems that are cool. For example, if a company has an application that is xBase, an old code base, they need compiled in the cloud, in order to do that means building a docker image on the fly to compile it and deploy it. Doing stuff like that is really cool to me.

What makes Blueprint such a great place to work?

There’s a real sense of momentum here. When you come from stodgy old corporate landscapes like I did, that’s really refreshing. There’s a sense that I can do anything in this kind of environment. Leadership doesn’t tell me, “that’s interesting, but we need you to do this.” This is the kind of environment that fosters self-education and innovation. If you have a high curiosity quotient, Blueprint gives you the ability to explore and learn. That’s how amazing things get created, and it’s encouraged at Blueprint.

If you didn’t get into software development what career might you have gone after?

I’d probably still be struggling to publish fiction, or I’d be a martial arts teacher at a small studio somewhere. I’ve studied martial arts since I was 12. When I got to college there were no official clubs. I was part of student government, so I ended up creating the clubs. We did judo, aikido and kendo. I still practice on my own now, but I am not actively part of a club.

What is the biggest mistake you’ve learned from?

Early on in my last job, I deployed something to production that I didn’t check myself. Someone made a modification to a schedule in the automation system, and I deployed it to production without realizing it included an old job that was there for a database cutover. When that ran the next night, it overwrote the production database with the old database. That was a tense couple of hours while they recovered it! That’s the day I learned not to just deploy things I’m given, but to make sure it works and is correct before it goes. That was a big life lesson.

When you think about the next five years in the technology space, what are you most excited about?

Machine learning is something I’m really interested in. That’s one of the few things I do in my spare time that is purely technical. The way the patterns of cognition are becoming evident is very interesting. I like looking at interesting data sets and writing python code to see if I can make sense of it.