The deck at Seattle Yacht Club on a nice day

Tell me about your background.

I grew up in the Midwest and after college I moved to the Seattle area for nursing school. After 10 years as an RN in the Infant Intensive Care Unit at Seattle Children’s Hospital, I joined their clinical information team because I spoke computers at a time when many nurses didn’t. We were working with clinical information systems and transitioning paper lab results and medical records to be stored and accessed electronically back in the stone ages of technology. I jumped in to help and became a clinical information analyst for two years, and then I became their web master for five more. I wanted to go further, so I moved on and eventually joined Microsoft. Computers just clicked for me. It was an intuitive sort of thing. I didn’t pursue formal training, but as technology evolved, I kept up. I did a few bootcamps, went to TechEd conferences and participated in some online training. I dug in and researched solutions to questions I ran into.

How do you go from nursing to tech?

In the Infant ICU there are many technologies and systems utilized in patient diagnostics and care. That technology kept getting more sophisticated, and where others tended to shy away, I delved into it. I began making web pages for the Infant ICU for things like treatments and plans of care. The IT department heard about it and tapped me to start teaching classes for the nurses. I transitioned to the clinical information system’s team when they were implementing a new electronic medical record, which fully melded my medical knowledge with technology. That position then morphed into a web master role. Websites became more and more sophisticated during the five years I was in that role. I started working with Microsoft technologies, like SharePoint before it was even called SharePoint. I was looking for the next thing because I discovered rather than managing, I thrived more in a hands-on role. I thought if I was going to do tech, I should go out and do it at a tech company. That experience led me to join Microsoft first as a vendor and then as a full-time employee.

How did you learn about Blueprint?

Two colleagues from my time at Microsoft had left to start Blueprint, and I kept in touch with them. They were working with Ryan Neal to build out the company and they looked me up to see if I was available because they wanted to “get the band back together.” I was doing a SharePoint implementation gig at the time and that was ending, so it was the perfect timing and sounded like a great opportunity. 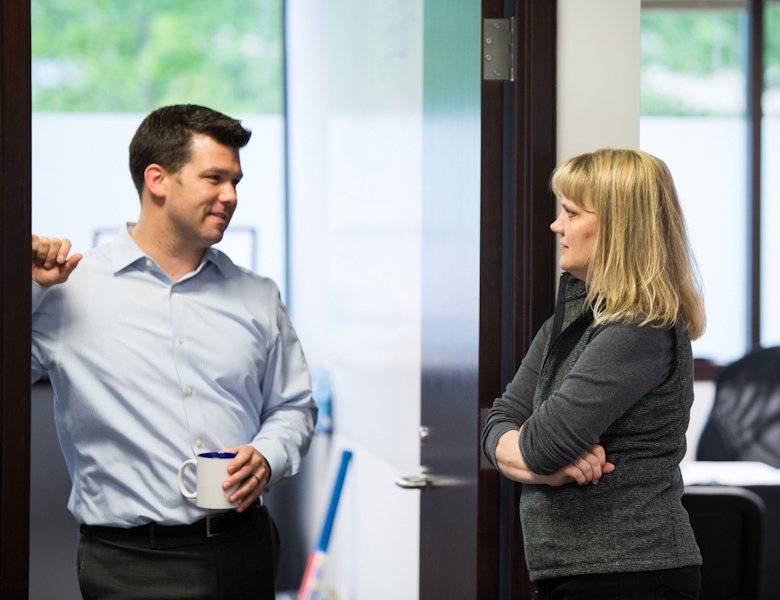 Barb in the office with Blueprint president, Ryan Neal.

I come from such a diverse background – I’ve had my hands in a wide variety of industries. I came from the healthcare field and have worked in city government, finance and at small and large tech companies. My experience as an RN helps me connect with any client ― I’m a techie with social skills. In nursing, you have to be able to speak medical terminology, but when a parent has a child who is sick you have to be able to interpret results for them and provide emotional support. I think it makes me more relatable and approachable, and I apply that to technical subjects as well.

How do you apply that to the technology space?

It’s not about handing over some piece of tech or software and then teaching the company to work with it. It’s about connecting with people, understanding their problems and figuring out how technology can solve them. Even better, it is about how we use their existing technology licenses to solve them. If you have M365, why not take advantage of SharePoint, Teams, the Office apps and email? And now that the Power Platform is in place, we can really modernize the workplace with Power Apps and Power Automate. These tools make business processes much easier – they do the work for you so people can focus on their real jobs.

What keeps you at Blueprint?

Variety and the opportunity to innovate. I like the wide variety of people we have here, and I like the mix of projects I get to innovate on. There’s always something new and challenging, I just really enjoy the eclectic mix of people, projects, technology and industries.

If you could go back in time and give yourself career advice, what would it be?

When I first got into SharePoint and M365, I wish I would have been more vocal in the community, so I’d be more of a recognized voice now. I just didn’t bother with it, but now, all the people who are looked at as experts and are at conferences and giving discussions now – I knew a lot of them. I had a family and my job and just didn’t really have the time. But I wish I would have started a blog and once a week posted stuff about the evolution of the web industry, SharePoint and the Power Platform – that’s probably my biggest regret.

What do you like to do outside of work?

My husband and I are heavily involved in the Porsche community. We got our first Porsche in 2001 and joined the local region of the Porsche club right way, so we’ve been members almost 20 years now. Our motto is, “Come for the cars, and stay for the people.” Being inside a Porsche is such a great experience because it is such a unique automobile. Porsches are so well made and are built to be driven – not just a means of getting you from point a to point b. They are meant to carve the twisty mountain roads. My husband and I are not hardcore track people; we don’t go racing, but we do both own helmets and driving shoes, and we go out and do autocross. It is just so much fun. We do so many different things through the group. We go on tours, have social events and do high-performance driving and autocross. We also go to national events. I was the newsletter editor of our local region for six years, putting out a monthly 45- to 52-page newsletter – a high quality magazine. I also run the club’s website and was on the Porsche Club of America’s national staff for a number of years. 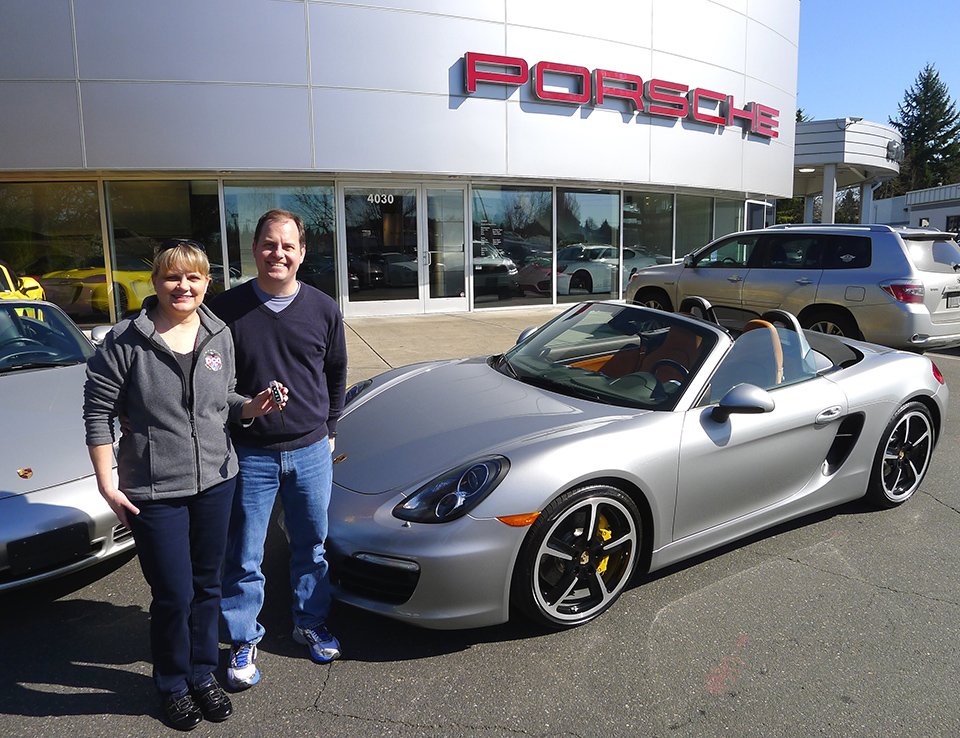 Barb and her husband posing in front of their 2013 Porsche 981 Boxster S in GT Silver Metallic.

What is your favorite Porsche memory?

Every year the Porsche club holds a national event – the Porsche Parade – and they hold it in different locations around the country each year. It is a week-long event with big formal banquets and events throughout the week. In 2010, it was held in Colorado and there were about 3,000 people there. At the last event, the big, wrap-up banquet, they were drawing door prizes and we won the grand prize. It was a trip to Germany with the Porsche Travel Club to drive a Porsche for seven days, staying at 5-star hotels and eating at 5-star restaurants. We drove the beautiful roads around Germany, through Bavaria, the Black Forest and Austria, and we went to the Porsche factory and the Porsche Museum. I can’t even describe how amazing that was – it was a trip of a lifetime. That really solidified our love of Porsches.

What is something outside of work you are really proud of?

When I was the editor for the newsletter for our regional Porsche club, I won the national award for it twice. There are 144 regions divided into 14 zones in the national club, and none of the regions in our zone had ever won – and then I won it twice. Later, I became the national newsletter chair, and I got to help other regions make their newsletters better. I really put the focus on making the newsletter include people – not just cars. It is the club newsletter, so I thought it should be focused on the community, the club and the people. I think that’s why I won when I did, because that’s the vision I had for the newsletter. Cars are amazing and beautiful, but I thought we should include people too, so if someone didn’t attend an event, they could read about it and feel like they were part of the club. They’d see a picture of someone that sparks conversations for people when they see each other. It really gave them a feeling of being part of group of people.