First job you ever had

Did you always want to work in computer science?

I always wanted to get into computers, but my parents had other ideas for me. My oldest brother became a nurse, and my parents thought I should too because they didn’t know if computers would be around for long. But people were always going to get sick. I became a CNA and had all my pre-recs done to become a registered nurse. But as I was about to submit my application to nursing school, I saw some information on the other paths students could take in college. I saw the computer science path and decided to switch. My parents were a little disappointed, but now that they’ve seen what’s happened in the technology space, they’re extremely happy. They just wanted me to have a job – and my dad always loved computers.

Yes! He bought a computer with a Pentium 4 processor when I was 8 years old. It was the first computer we ever had in the house, and he and I broke it the first day. We accidentally formatted the hard drive and had to figure out how to reinstall Windows 3.1, which took a bunch of floppy disks. My dad couldn’t read English, so I was translating and helping. It was the first time we booted it up, and he had spent two months’ wages on this thing, so we had to fix it. We spent the rest of the week trying, and that triggered an obsession with fixing problems. 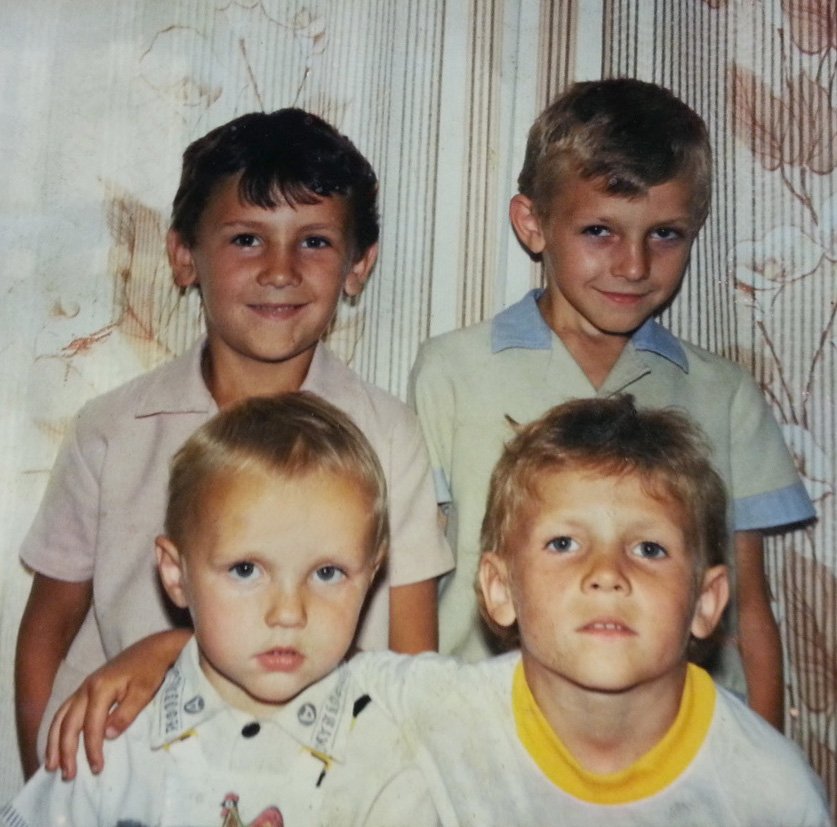 Alex (pictured bottom right) grew up in a family with three brothers.

Where is your family from?

I was born in the Soviet Union, on the border of Russia and Ukraine, and emigrated to the U.S. when I was 6 years old. The future wasn’t there for us because most people either became farmers or moved away. Nothing against farming, but my father wanted to set my three brothers and me up for success, so he made the difficult decision to go into the unknown. He worked 12 hours a day fixing engines for minimum wage and didn’t want government assistance. My dad’s sister and her husband emigrated to California, but it was too hot for them, so they moved north with a few of their friends. They settled in Mount Vernon, Washington, and called my parents over in 1998. Mount Vernon was a little too much of a farm town for my parents, so we ended up in Bellingham, which I consider my hometown. But we bounced between Bellingham and Ferndale, and I actually settled in Ferndale as an adult – I like the peacefulness of smaller towns.

How did you end up as a Data Engineer?

In college, I thought I wanted to be more on the networking and architecture side. I started working at a help desk at a local Bellingham company and moved up the ranks until I was setting up firewalls and infrastructure. Because I was doing the same thing over and over again, I decided to start automating everything for that company. I was doing DevOps before DevOps was a well-known skill set. When that term became popular, and a large technology company was looking for DevOps engineers, I applied. I got the job through one of their vendors and did a lot of data ingestion automation for them. I eventually transitioned into a Power BI role doing BI analytics and visualizations because they didn’t have that skill set on staff. I had heard of Power BI, and I knew I could figure it out for them. I didn’t have any official training; I just played around with it over a weekend and built them a report, which they loved. The company liked my work and eventually introduced me to Blueprint. Ever since, I’ve been testing and deploying solutions with the latest that is out there. I transitioned to a BI Engineer role and then started modeling data for my BI solutions and building infrastructure all around it.

Blueprint clients always tell us they wish they had a team filled with people like you – why do you think that is?

I’m the type of person that if I start trying to fix something, I can’t let it go until it’s solved. Even at home, I took my server apart because something was broken. I couldn’t figure it out because I hadn’t worked with physical hardware in a long time, so I stayed up until 3 a.m. to figure it out, and then I could go to bed. It’s the same working with clients. We often face a lot of roadblocks with clients – maybe it’s getting the proper approvals to access the data we need. I’m the type of person who will work with the team to dig into the concept and do everything possible without data access so we can demo a solution as early as possible. Clients really appreciate that, and they see what we’re capable of even without full data access.

How does that schedule work with your family?

I don’t need a lot of sleep. I block out 6 p.m. to midnight as family time to be with my wife and kids, and then I get up early, when they are still sleeping, and dive into different projects. 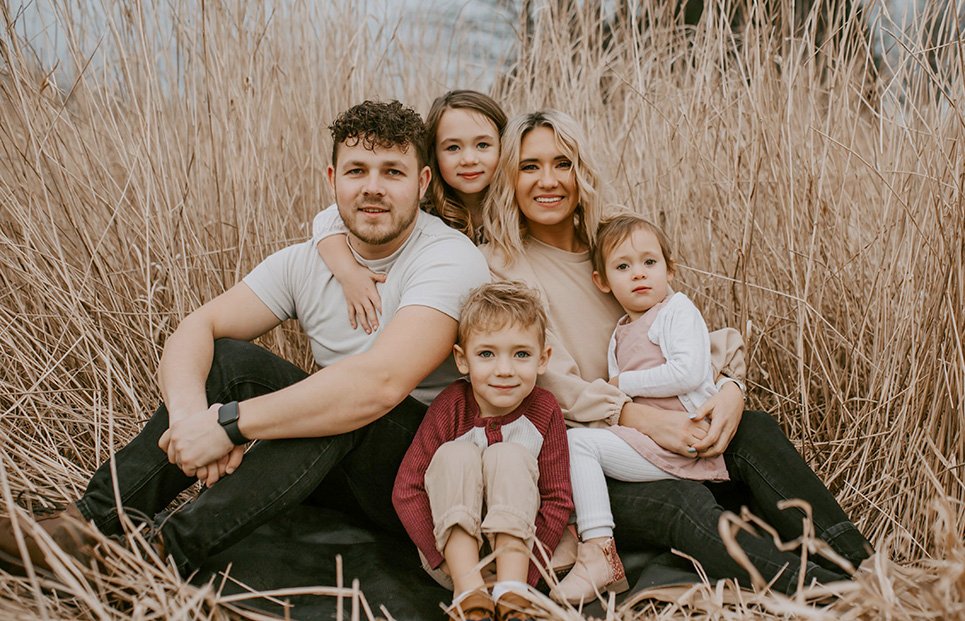 Alex with his wife and three children.

Tell me about your family.

I was married at 20 years old and had three kids by age 26. People always seem surprised by that, but my wife was my high school crush, and we decided to start our journey together young. My dad was 20 years old when he got married, and my parents had all their kids early on. I have three brothers, and I look at my parents now – all of us are out of the house, and they’re only in their early 50s, going on cruises and vacations and can play with their grandkids. It seemed like a good way to do it.

What is the coolest thing you’ve done at Blueprint?

There was one engagement where I had to query 16 exabytes of data (16 million terabytes), which is a ridiculous amount of data that not many people have had the opportunity to work with. I was tasked with figuring out ways to speed up the data querying process, which was fun for me because it was something that hadn’t been done. There weren’t any solutions you could find just searching in Google – nobody had done it publicly. I read the limited documentation that was out there and tried to reverse engineer things. In the end, I was able to build optimized queries that cut run time from 20 to 30 minutes to seconds.

What makes Blueprint such a great place to work?

Everyone is super talented, and they are so open to sharing their skills. It is truly an environment that fosters growth and learning, which is great because I get bored easily if I’m not challenged. Being around so many smart people has helped me soak up a lot of information, and then I can turn around and apply those new skills to new engagements. The management team also encourages the tech team to stretch their skillsets – in a good way. When one of my managers asks me if I can do something, my response, if I can’t, is always that I can learn. So, he puts me on project teams and trusts that I will always figure it out. Often, when a client needs a weird skillset, they’ll approach me because they know I’m always up to try to figure something out. Honestly, friends tell me about job opportunities at their companies all the time, but I love being in a place where I’m constantly challenged and somewhere that requires diverse thinking to solve something with tools that may be brand new or not exist yet. Other companies can’t compare to Blueprint in that way.

What is your Big Hairy Audacious Goal right now?

I’ve seen common threads between things I’ve been working on, and there is a need for an automated pipeline solution that can be pointed at a data source, ingest it, store it and process it. That is something I’ve been messing around with, but it is nowhere near being done yet. I want to build that solution from start to finish and have it be autonomous – so you can deploy it and have it work, from engagement to engagement. I’m doing it in my own time, but it is sharpening up my skills for the other work I’m doing and will be impactful in the future.