Combatting the Amazon effect in retail

Your customers haven’t left your business for good, they’re just not happy with the customer experience they’re receiving.

Brick-and-mortar retailers have been in existence almost as long as human beings have. The first retailers opened up shop in 800 B.C. in the Agoras of Ancient Greece selling meats, vegetables, honey-laden pastries, brightly colored linens and anything else a Greek citizen might need to survive. These customers didn’t need honey-laden pastries or bright colored tapestries to survive, but one might argue that it’s the things we don’t need that have kept us around for so long. Would we have survived on meat and veggies alone? Yes – but pastries and candies made a tough life that much more enjoyable. The retailers of Ancient Greece and all those that followed understood that.

Retailers have always been innovators. For the first two centuries of the United States mom-and-pop shops reigned supreme. The mid 1800s brought the department store. In 1883 the original retail disruptor came on the scene – the cash register, which eventually led to store credit cards in the 1920s. Department stores gave way to malls and big box stores in the 50s and 60s, and for many years these traditional retailers were the end all and be all for shoppers. That was until 1994 when Amazon launched, changing the game, and the fate of these retail institutions, forever.

The Amazon Effect is a catch-all term for the powerful disruption that e-commerce has brought to the retail market, causing customers to expect a more convenient, frictionless, customized experience when shopping. While there has been talk of Amazon shutting down in- person retail for good, that has not proven to be the case. In-person retail will always have one key advantage over online retail – personalized experiences and instant gratification. Amazon knows this, or they wouldn’t have opened in-person stores themselves. But to stay successful, retailers must bring the convenient, frictionless, customized experiences to their in-person stores while retaining and expanding on their natural advantages. 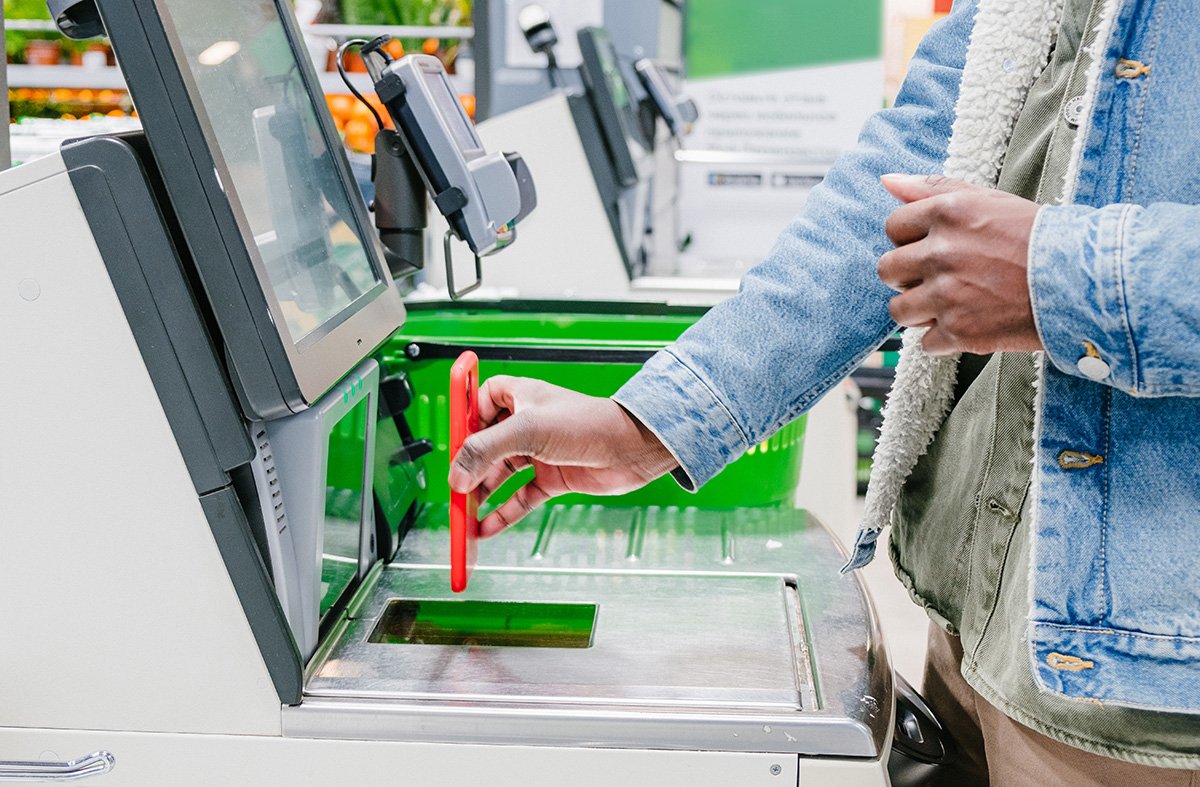 Self-checkout is not a new concept, but it’s adaptation across all of retail is changing. Research finds that 87% of U.S. consumers prefer to shop at stores with touchless or robust self-checkout options

In a recent study by New ACI Worldwide and PYMNTS, 81.8 percent of participants said that they prefer to grocery shop in-store over online. But, with the influence of Amazon Go, a retail concept where AI and image recognition allow shoppers to pick items off the shelf and leave the store without using a cashier, as well as Dash Cart, an Amazon cart that has weight sensors and cameras that allow it to scan your items as you’re placing them in the cart so you can skip the checkout line, customers now expect those online conveniences at all stores. In fact, a study by Shekel shows that 87% of U.S. consumers prefer to shop at stores that have touchless or robust self-checkout options.

Fortunately, Amazon is sharing its secrets on this one. They have rolled out Amazon Personalize for all AWS users to have access to the technology that enables Amazon Go, and they have introduced Amazon Pay which can give retailers access to their automatic payment technology.

Customize the in-person experience with your customer data 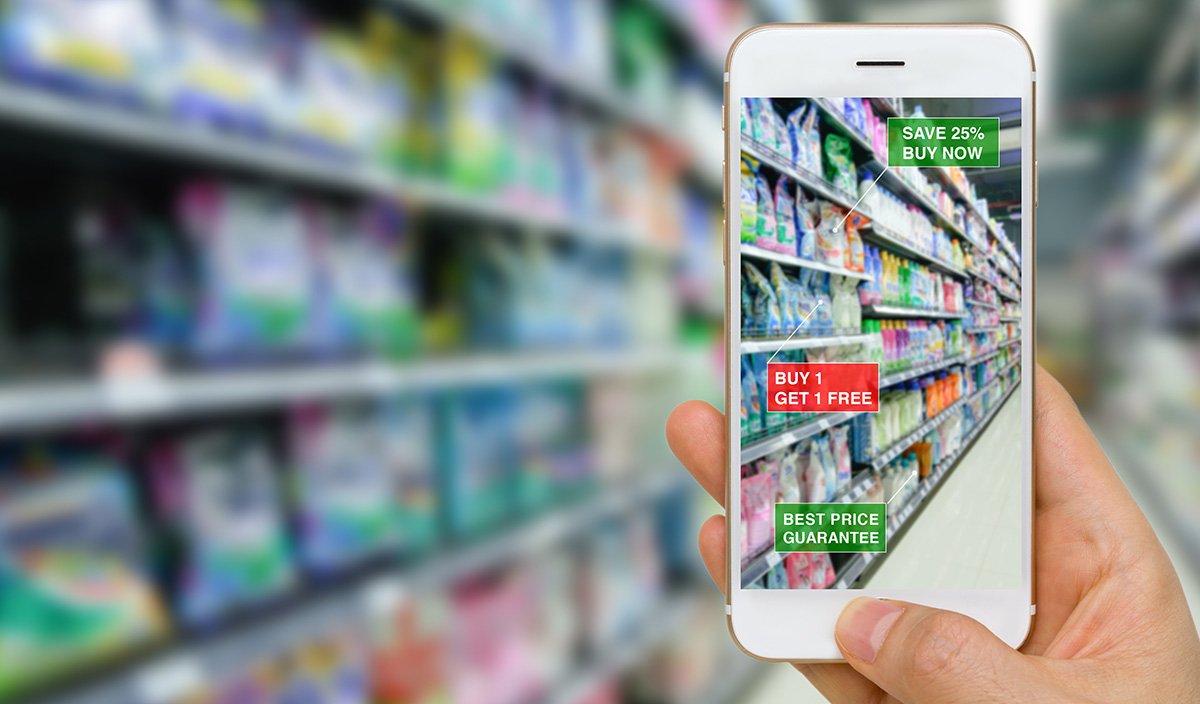 Augmented reality in everyday experiences (like grocery shopping) is coming. How you adapt this technology can be a differentiator that an online shopping experience can’t match.

When a user logs on to Amazon, the site knows their name, their likes and dislikes, and items they have recently viewed or purchased, which power relevant product recommendations. Customers feel seen and heard, like Amazon really knows them. But there are ways brick-and-mortar stores can bring this level of personalization to their physical stores. Many retailers are working on mobile technology for their employees using AI and machine learning that will allow for customer identification and richer engagements with shoppers. It might seem like a large investment, but with the importance of customer experience ranking above price and products and customers being more willing than ever to leave their favorite brands if they don’t meet their expectations, investing in these technologies is necessary to prevent customer churn and stay relevant and profitable in the modern retail landscape.

Retailers can also take advantage of video analytics from recordings they already have to determine customer behavior and use that information to optimize store layout, inventory management and provide special offers. Bringing key features of the online experience to the physical store is essential. For example, provide kiosks where customers can access product information, reviews and personalized recommendations. In a study by SOTI, 92% of shoppers prefer stores with mobile experiences like kiosks, apps and personalized coupons.

Spotlight what you have that they don't 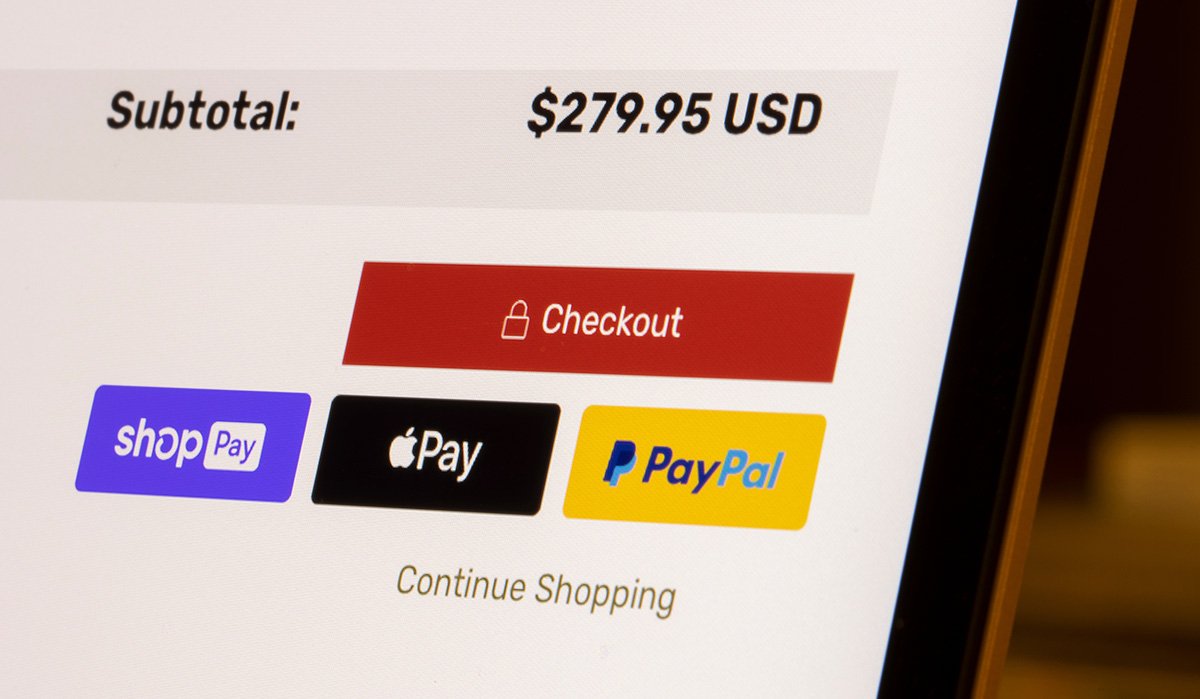 Amazon has made the purchasing experience extremely easy. With one click customers can have anything they desire delivered in a matter of days, or even hours. But there are still disadvantages to online shopping. According to PwC’s annual consumer survey, 65% of customers prefer shopping in-store to avoid delivery fees. In fact, 83% of shoppers say the top reason they abandon their cart is high shipping fees. Disruptive retailers are taking advantage of this by adding functionality to their retail stores to allow customers to pick up and drop off items from online orders. Retailers are also helping shoppers avoid the inconvenience of having to mail back returns by allowing customers to return items to these physical stores.

Another advantage for brick-and-mortar retailers is that customers still want to tangibly experience products before they purchase. For example, 61% of shoppers say that like trying on clothing before they buy it. The same retailers that have these pick up and drop off locations for online shoppers are also adding tailors and personal stylists to these locations to enhance the personalized experience that online shopping can’t offer.

The future of retail begins with Blueprint

When modern retailers implement the technologies and the convenience of the online Amazon model while combining the unique personalized experience only brick-and-mortar stores can offer, they will achieve the competitive advantage over Amazon in the new chapter of retail innovation.

If you want to learn how you can harness these technologies with the data you already have at your fingertips, Blueprint can take you to that next chapter. Let’s talk. 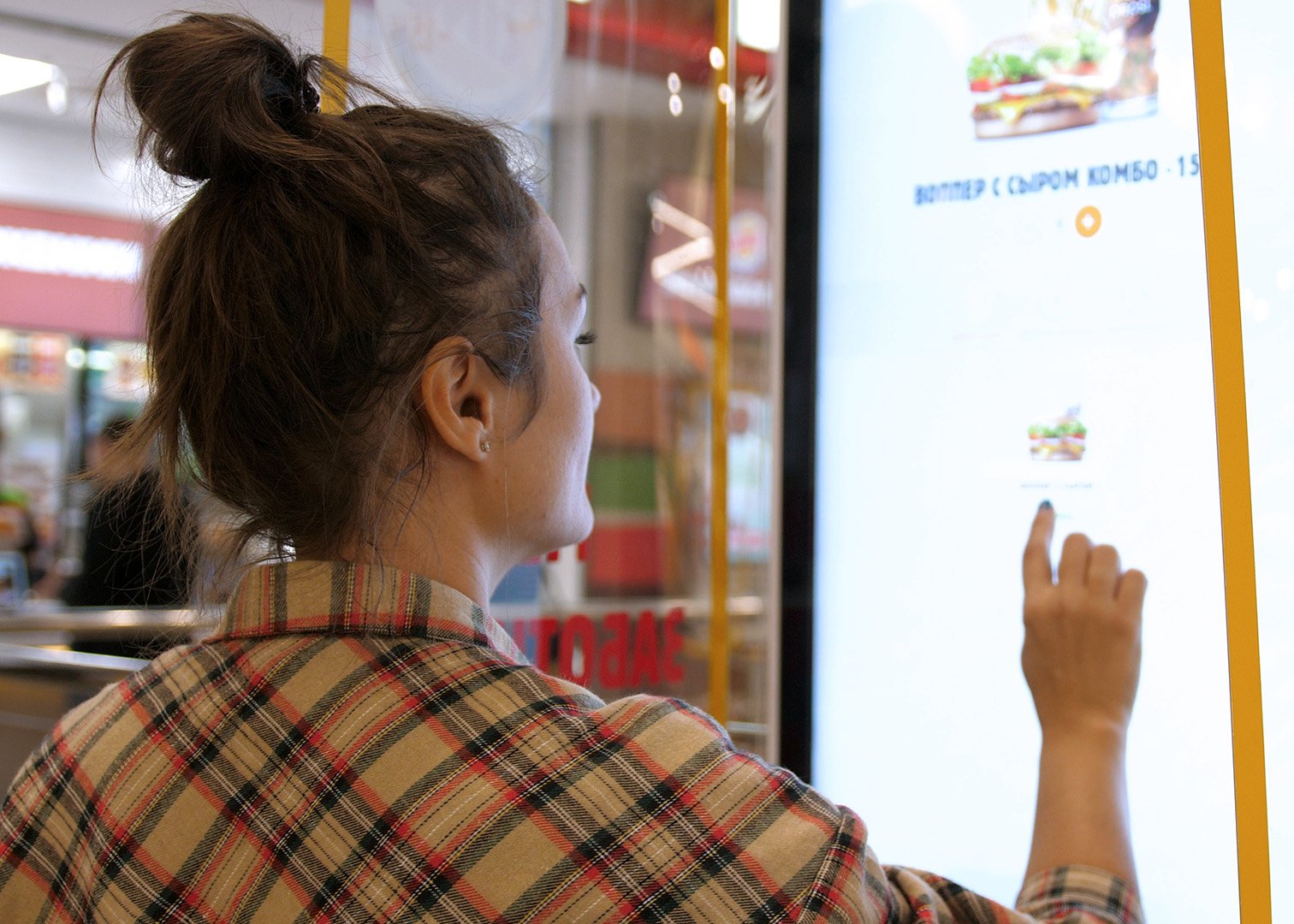 From stranger to super-fan: 5 ways to give customers what they want, when they want it

Traditionally, customer loyalty programs focus strictly on signups and discounts. That’s not enough anymore. The solution lies in connecting your data to your customer experience. 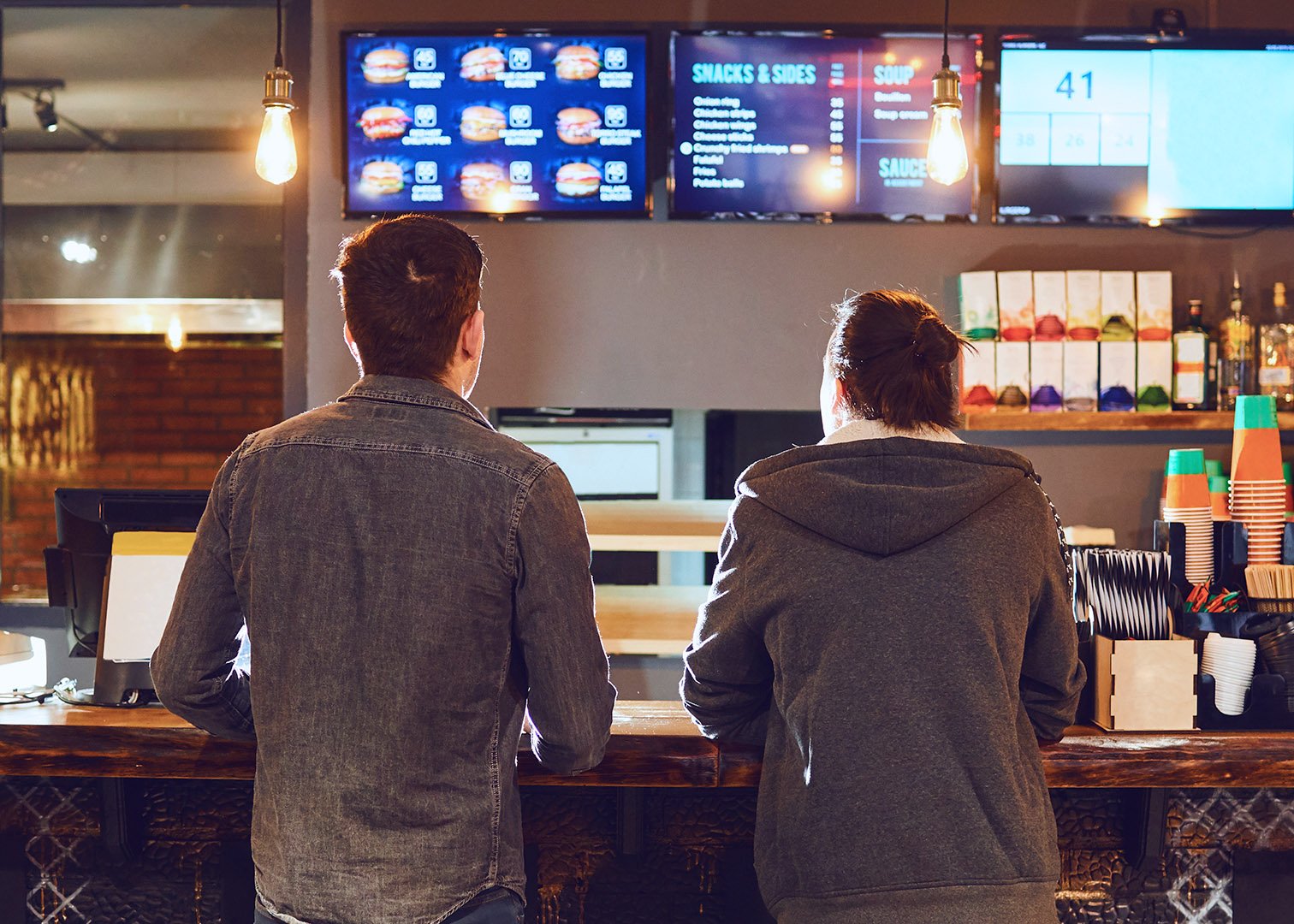 What the top QSR chains are doing that others aren’t

Since the peak in sales during the Covid-19 shutdown, fast food traffic has continued to see its post-pandemic decline. Consumers still want fast food, but they don’t want to go back to pre-pandemic times. They have new demands.